A total of 112 organic personnel from Central Command (Centcom) participated in the first day conduct of the Local Absentee Voting (LAV).

The voting started at past 8a.m. on Wednesday (April 27) with Lt. Gen. Nicanor Vivar, commander of Centcom, casting his vote.

“This is our right to suffrage. This is the only way we can contribute to society regarding voting. At ito lang ang aming pwedeng gawin bukod pa dun sa pagsisigurado na maayos yung election natin (This is what we can do aside from ensuring that the elections will be orderly),” he told reporters in an interview after he casted his vote.

The voting was done at the De Goma Hall inside the headquarters of Centcom located at Camp Lapulapu, Barangay Apas in Cebu City.

As early as 7a.m., soldiers who were duly registered by the Commission on Elections (Comelec), waited outside the hall prepared to cast their votes.

Vivar said that the military has always pushed for their right to exercise their votes since they cannot actually participate during election day due to election duties.

“As a good citizen of the country, gusto namin bumoto (we also wanted to vote),” he added.

He also added that he wished that the candidates’ promises and platforms, should they win, will be realized.

BACOLOD CITY — Colonel Francisco Delfin, commander of the Philippine Army’s 303rd Infantry Brigade, said the Army has not monitored the existence of private armed groups in Negros Island that maybe used during the elections.

Delfin added that they were monitoring instead the presence of armed groups, although in small numbers, engaged in food foraging mission in southern Negros.

Our soldiers are responding to it, he added.

Delfin also reminded candidates not to pay the so-called “permit to campaign” fees charged by the New People’s Army (NPA).

“Do not yield to NPA extortion activities. (The payment) will be used against the government,” he said.

Delfin said they had not received complaints from candidates so far.

The Army soldiers are very active in the interior areas of Negros Island to prevent any possible terroristic activities of lawless elements, he added.

The Commission on Elections has warned candidates that they could face disqualification for paying “permit to campaign” fees.

The NPA rebels charge fees, depending on the position a candidate is seeking and the area where the rebels operate. (PNA)

BRIGADIER General Harold Cabreros will take over as commander of the Army’s 3rd Infantry Division (ID) in rites set on Wednesday, December 23, at Camp Macario Peralta in Jamindan, Capiz.

Cabreros will succeed Brigadier General Reynaldo Mutiangpili, who will retire from the military service on December 27. [Read more]

A convoy of two Army trucks, an Elf truck and a mini dump truck, which were loaded with relief goods for Typhoon Nona victims in East and North Samar, were ambushed along Maharlika Highway in Pinabacadao, Samar on Friday, December 18.

Two soldiers were wounded in the incident.  [Read more]

He added this attack is in violation of the Comprehensive Agreement on Respect for Human Rights and International Humanitarian Law (CARHRIHL).

82nd Infantry Battalion commander Lt. Col. Enriqueto Deocadez Jr., said his troops, who were based in Miag-ao, Iloilo, were headed to Antique aboard two military trucks when an estimated 10 rebels detonated the IED.

The troops disembarked from the vehicles, returned fire and maneuvered to occupy the vantage position as they pursue the rebels.

Six 82nd Infantry Battalion troopers and a civilian were wounded due to IED shrapnel.

The soldiers who sustained minor injuries are now in stable condition and back to duty after they were treated as out-patients in a hospital in Guimbal, Iloilo.

Meanwhile, the civilian victim identified as Bryan Servano is still confined in Guimbal hospital due to a wound.

In a separate incident, a group of lawless armed elements believed to be rebel fighters burned heavy equipment for a mini-hydro project in Igbaras, Iloilo at about 8 p.m. Sunday.

Tiongson said the bandits barged into the project site of Century Peak in Barangay Passi and at the dam site in Barangay Igcabugao and burned seven trucks, an Isuzu elf and three backhoes and carted away a shotgun and a .38 caliber revolver belonging to the duty security guards.

The attack stemmed from the company’s failure to give in to the extortion demands of the rebels. (PNA)

CAMP LUKBAN, Catbalogan City – Eight soldiers who were wounded in separate clashes last November in Samar were awarded with wounded personnel medal and cash assistance for their bravery and selfless service under the 8th Infantry Division, Philippine Army in a ceremony Tuesday morning, December 1

The two personnel of 87th Infantry Battalion namely: Cpl Jonas C Autor and Pfc Nico Basibas, were wounded in an encounter with more or less 15 New People’s Army (NPA) rebels at Barangay Buluan, Calbiga Samar at around 6:00 a.m. on November 25, 2015. The encounter resulted to the death of one unidentified NPA member, seizure of an enemy encampment with 18 enemy bunkers, one multi-purpose hall and one classroom and the recovery of 200 rounds of K3 squad automatic weapon ammunition, one memory card, one binocular and other subversive documents.

The other soldiers namely: Pfc Pablito Pomarca and Pfc Eric Lazara of 63rd Infantry Battalion were wounded during an ambush perpetrated by NPAs at vicinity Barangay Washington, Catarman, Northern Samar at about 03:28 p.m., on November 24, 2015.

While pinning the medals to the wounded troops, Maj. Gen. Velarmino said: “Your bravery in carrying out your assigned task is remarkable and worth emulating by other soldiers. With that, I would like to extend my congratulations to all of you for a job well done in protecting the people to the extent of risking your lives.” 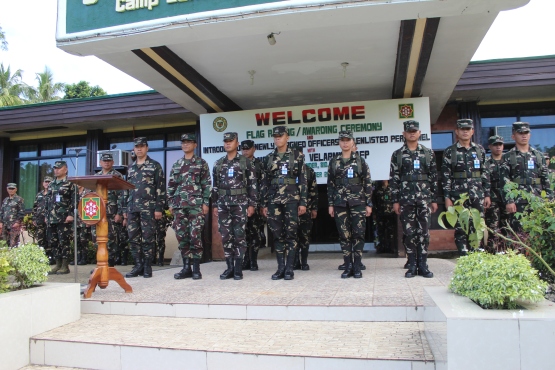 As part of the Army Command’s tradition, the young officers were presented during the flag-raising ceremony on November 9, 2015 in this camp, where they introduced themselves to the officers, enlisted personnel and civilian employees of the Army Command.

Before their deployment in the different field units, the new officers will undergo the Platoon Leader’s Course to refresh them of the military knowledge and skills they acquired from their respective military schools.

Major General Jet B. Velarmino, Commander of the Army in Eastern Visayas, stressed in his message to the new officers the Armed Forces of the Philippines’ Core Values, of Honor, Patriotism and Duty.

He said, “Cling on to these values and you will never go astray from the narrow path towards becoming an ideal soldier in the mold of our brave and noble military heroes.”

“The Country and the Filipino people expect much of you. Good luck and contribute as much as you can to the achievement of peaceful and development-ready Eastern Visayas,” he added. (8th Infantry Division’s Public Affairs Office)

As part of their foreign study tour in the Philippines, some 26 delegates from the Indian Armed Forces’ (IAF) College of Defence Management visited the Central Command (Centcom) Headquarter of the Armed Forces of the Philippines (AFP) on Thursday, October 29.

The IAF’s study tour in the country runs from October 25 to 31. Their itinerary includes visit to the beautiful beaches and tourist spots in Cebu.

Centcom’s support to the IAF student officers is in line with AFP’s thrust to develop mutual understanding and foster good relationship with the IAF.

The IAF’s study tour in the country aims to provide its delegates exposure with regard to the process of defense management of the country. It also aims knowledge exchanges in organization, culture and history of the Philippines.

8th ID soldiers urged to be non-partisan in 2016 elections

CATBALOGAN CITY, Samar, Oct. 26 (PNA) – The commander of the Philippine Army’s 8th Infantry Division in Eastern Visayas reminded all its men to be non-partisan in the 2016 national and local elections.

The military, according to Maj. Gen. Jet B. Velarmino “must reassure the people in the region that the military will remain professional, non partisan at all times and must always be a neutral instrument of the state, no matter which party holds sway.”

“Keeping our politics private is a good step,” he said. “We should always obey civilian authority, support and defend the constitution and to do our duty at all times.”

Velarmino stressed that he is not suggesting that military must abandon all personal opinions about social and political issues.

However, in the execution of their mission, it is expected that military must put aside their political preferences.

“Political opinions have no place in our conference room or even in military camps,” he said.

Velarmino noted that “part of the deal we made when we joined the military was to willingly subordinate our individual interests to the greater good of protecting vital national interests.”

Meanwhile, the Commission on Election here is set to have a meeting next month with the police and military in the region for an in depth assessment of the political situation in Samar province.

Previous election crisis in Samar seemed to have ignited an intense violence and prolonged political crisis, especially, in the first district, according to Velarmino. (Philippine News Agency)

My Tweets
Blog at WordPress.com.